Although the art form of batik is very intricate, the tools that are used are still very simple. The canting, believed to be a purely Javanese invention, is a small thin wall spouted copper container (sometimes called a wax pen) that is connected to a short bamboo handle. Normally it is approximately 11 cm. in length. The copper container is filled with melted wax and the artisan then uses the canting to draw the design on the cloth.

Canting have different sizes of spouts (numbered to correspond to the size) to achieve varied design effects. The spout can vary from 1 mm in diameter for very fine detailed work to wider spouts used to fill in large design areas. Dots and parallel lines may be drawn with canting that have up to 9 spouts. Sometimes a wad of cotton is fastened over the mouth of the canting or attached to a stick that acts as a brush to fill in very large areas.

The wajan is the container that holds the melted wax. It’s hot wax pot. Normally it is made of iron or earthenware. The wajan is placed on a small brick charcoal stove or a spirit burner called an ‘anglo’. The wax is kept in a melted state while the artisan is applying the wax to batik fabric.

Different kinds and qualities of wax are used in batik. Common waxes used for batik consist of a mixture of beeswax, used for its malleability, and paraffin, used for its friability. Resins can be added to increase adhesiveness and animal fats create greater liquidity.

The best waxes are from the Indonesian islands of Timor, Sumbawa and Sumatra; three types of petroleum-based paraffin (white, yellow and black) are used. The amounts mixed are measured in grams and vary according to the design. Wax recipes can be very closely guarded secrets. Varying colors of wax make it possible to disguise different parts of the pattern through the various dying stages. Larger areas of the pattern are filled in with wax that is cheaper quality and the higher quality wax is used on the more intricately detailed sections of the design.

Creating batik is a very time consuming craft. To meet growing demands and make the fabric more affordable to the masses, in the mid-19th century the . cap. (copper stamp – pronounced chop) was developed. This invention enabled a higher volume of batik production compared to the traditional method which entailed the tedious application of wax by hand with a canting.

Each tjap is a copper block that makes up a design unit. tjap are made of 1.5 cm wide copper stripes that are bent into the shape of the design. Smaller pieces of wire are used for the dots. When complete, the pattern of copper strips is attached to the handle.

The tjap must be precisely made. This is especially true if the pattern is to be stamped on both sides of the fabric. It is imperative that both sides of the cap are identical so that pattern will be consistent.

Sometimes tjap are welded between two grids like pieces of copper that will make a base for the top and theApplying wax with cap bottom. The block is cut in half at the center so the pattern on each half is identical. tjap vary in size and shape depending on the pattern they are needed for. It is seldom that a cap will exceed 24 cm in diameter, as this would make the handling too difficult.

Men usually handle the application of wax using cap. A piece of batik fabric that involves a complicated design could require as many as ten sets of cap. The usage of cap, as opposed to canting, to apply the wax has reduced the amount of time to make a cloth.

Today, batik quality is defined by tjap and tulis, the second meaning hand-drawn designs which use a canting and stamp, or kombinasi, a combination of the two techniques.

Traditional colors for Central Javanese batik were made from natural ingredients and consisted primarily of beige, blue, brown and black.

The oldest color that was used in traditional batik making was blue. The color was made from the leaves of the Indigo plant. The leaves were mixed with molasses sugar and lime and left to stand overnight. Sometimes sap from the Tinggi tree was added to act as a fixing agent. Lighter blue was achieved by leaving the cloth in the dye bath for short periods of time. For darker colors, the cloth would be left in the dye bath for days and may have been submerged up to 8 – 10 times a day.

In traditional batik, the second color applied was a brown color called soga. The color could range from light yellow to a dark brown. The dye came from the bark of the Soga tree. Another color that was traditionally used was a dark red color called mengkuda. This dye was created from the leaves of the Morinda Citrifolia.

The final hue depended on how long the cloth was soaked in the dye bath and how often it was dipped. Skilled artisans can create many variations of these traditional colors. Aside from blue, green would be achieved by mixing blue with yellow; purple was obtained by mixing blue and red. The soga brown color mixed with indigo would produce a dark blue-black color. 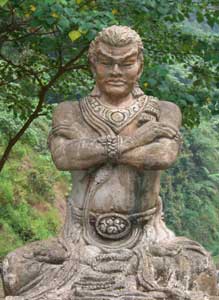 Batik -which has been a culture in Majapahit- could be found at Mojokerto and Tulungagung. Mojokerto was a region related to Majapahit. At Tulungagung, we could find many heritages and stories. Once upon a time, it happen the fight between Majapahit and the ruler of Tulungagung, Adipati Karanglewas. He was murdered at that fight. As a result, the region was occupied by Majapahit and it brought batik culture in this region. Nowadays, batik regions in Mojokaerto are Kwali, Mojosari, Betero, Sidomulyo and Jombang. In the end of 19th centuries, there were some batik makers using the material weaved white clothe and for the batik drugs, it made of soga jambal, bengkudu, nila tom, tinggi, etc. Foreign drug had just been known after the World War I. It was sold by China trader at Mojokerto. Stamp batik and foreign drug were known at the same time. Stamp was produced in Bangil and Mojokerto. Batik entrepreneur could buy it in Porong Sidoarjo market. It was known as a crowded market –before world economy crises- whose many batik productions came from Keducangkring and Jetis Sidoarjo. When the economy crises had occurred, Mojokerto batik entrepreneur couldn’t run their business. It took place until the occupation of Japan in Indonesia. The batik trade recovered after the revolution. At that time, Mojokerto had become a colony region. The specific feature of Mojokerto batik (kalangbret) is almost similar to Yogyakarta batik – white background, light brown, and dark blue design- Although batik has been known since Majapahit, its development has just begun spreading quickly at Yogyakarta and Surakarta. It could be found by considering its design.

When bitter fight occurred between Dutch and Diponegoro troops, Kyai Mojo withdrew most of his troops. They ran a way to the East, Majan -It has been a status as Merdikan village, special district and its village headman is a kyai (Islamic teacher or Islamic leader) whose title is given hereditary. This kind of Majan batik production is a heritage of Diponegoro period.

Babaran color of Majan and Simo batik are unique. Its light red comes from bengkudu and the other ones come from tom. Many of batik entrepreneurs came from Solo. They arrived in Tulungagung in the end of 19th centuries. While the batik center, it was in Sembung. Now, some of them lived there.

In addition, there were also many batik regions called Trenggalek and other regions in Kediri – in which batik nature is household craft and its babaran is handwritten batik- Ponorogo, whose batik art has a close relation with Islamic spreading and the last kingdoms. It has been said there was Majapahit descendent in Batorokatong region, called Raden Katong (Raden Patah’s young brother) who spread Islam in Ponorogo. His current heritage is a mosque, located in East Patihan area.

The next development, there was an Islamic Boarding in Ponorogo, Tegal sari, which has been managed by Kyai Hasan Basri. Many people had known him as Kyai Agung Tegal Sari. He had become a son in law of Solo king. In this place, people learned not only Islamic religion but also constitution, war science and literature. One of the most outstanding pupils from Tegal Sari, Raden Ronggowarsito, had a great concern in literature. Batik art had just known in palace area in that time. However, not long afterward, it became down to earth in Tegalsari because Kyai Hasan Basri and his wife (the princess of Solo) followed by her companions, had moved on and lived there. They taught it to the youth. The educated youth would devote themselves in society, especially in the field of administration and religion.

The old batik area that we can find until today are in Kauman region such as East Kepatihan, Ronowijoyo, Mangunkusuman, Kertosari Setono, Cokromenggolo, Kadipaten, Nologaten, Bangunsari, Cekok, Banyudono dan Ngunut. Many years ago, drugs used in batik process were self domestic product made of various trees: Tom tree, Bengkudu tree, and Tinggi Wooden. For white material, it was also self domestic product made of Gendong weaving. Bam import white material had just been known in Indonesia approximately in the end of 19th centuries.

Stamp batik production has just been known after Word War I presented by Chinese, kwee seng in Banyumas. In the beginning of 20th centuries, batik was a leading product in Ponorogo especially on its nila color that was difficult to become discolored. This was the reason why many entrepreneurs from Banyumas and Solo provided a lot of jobs to batik entrepreneur in Ponorogo. The popularity of stamp batik had led to the present of rough batik called blue unbleached plain cloth. Then, stamp batik had become a leading product in Indonesia. 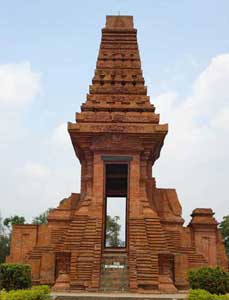 It has a close relation with Majapahit Kingdom development and Islamic spreading in java. In many cases, most of batik development occurred in Mataram period, Solo and Yogyakarta Kingdom. Therefore, it has been known since the period of Majapahit Kingdom and it keep on improving for the next kings.

Meanwhile, in the end of 18th centuries or in the beginning of 19th centuries, batik has been dominated by Indonesian people, especially by Javanese. In the beginning of 20th centuries, they produced handwritten batik while stamp batik had just been known in 1920. Related to Islamic spreading, most of the batik shopping center was located in Islamic regions and it was used to struggle against the Dutch economy.

Batik art is a painting art on the material. It had a function to be a costume worn by the princes in the past. For the first time, it has just been produced in the palace area and it was worn by the prince, his family and his companions. Then, it was brought and processed outside because many of the companions lived out of the palace area. Not long afterward, it was imitated by the closest people and then it became a livelihood for many housewives to spend their leisure time. Finally, batik was not only worn by prince and his family but also for common people, both man and woman. Furthermore, the batik material is made by weaving. For the dye material, it came from Indonesian natural plants such as: Bengkudu tree, tinggi, soga and nila. The soda material made of ash soda while its salt made of mud.