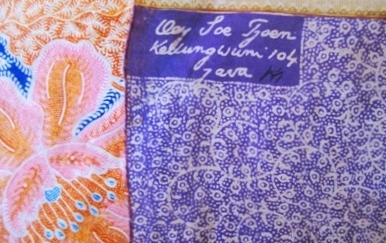 History of Oey Soe Tjoen begins in Pekalongan in 1925. Oey young. With Jade Nio Tjoen Kwee, his wife, he pioneered the batik. His house in Jalan Raya Kedungwuni, Pekalongan, as place of business.
According to the third generation of Widianti Oey Soe Tjoen “production process can be up to one and a half years,” he said. “Price is equal to the price of one.” With the long process of making batik production, Oey Soe Tjoen hard was encouraged. Moreover, the number of workers was not as much as it used to be. Now they can make at most two pieces of cloth a year.
The famous batik motif design is the motif of buketan-influenced style of the Netherlands Batik, the Peacock Butterfly, motif and Java batik Hokokai style. The main Motif is famous for its tint to seem very much alive. Whereas to display such motives, the effect requires workmanship for up to 3 times the sticking of the night. Isen-isennya Motif is very dense and smooth. Imagine drawing with pen rotring numbered 0.1 and it cant used by pembatikan Oey Soe Tjoen size with it.
The first is a batik from first Batik generation i.e. Oey Soe Tjoen (grandfather of Widianti) who batik factory founded it with his wife Kwee Tjoen Jade Nio that debuted from 1925-1976. The two Batik from the era of the 2nd generation i.e. Oey Kam Long, son of the couple (the father of Widianti Widjaja) and his mother Lie Tjien Nio in 1976-2002. Although using the name Oey Soe Tjoen, actually a division of tasks in running the batik process is as follows: the husband is the task in terms of sales and staining (immersion), Wife is duty: design motifs and quality checks. All of which is now done by Widianti Widjaja.