Batik Development At Other Cities 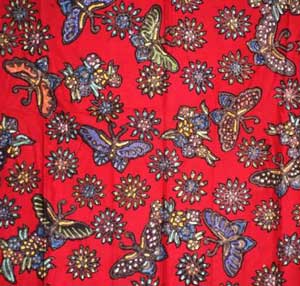 After war in 1830, Dipenogoro’s companions presented batik in Sokaraja -batik center in Banyumas and the place where Najendra, one of Diponegoro’s companion improved dip batik- the unbleached plain cloth used was self weaving product and the dye used was tom tree, pace tree and bengkudu tree on which they gave red and yellow color. From time to time, Batik production had been developed in Sokaraja. In the end of 19th centuries, they made a direct partnership with batik maker from Solo and Ponorogo. Batik production area that was placed in Banyumas had been known since many years ago. It was because of its design and specific color. To day people call it in Batik Banyumas. After World War I, Chinese was not only became a batik trader but also material batik trader.

After the end of Diponegoro’s war, the family of kingdom moved on out of Yogya  – because of their unwilling to cooperate with the Dutch colonial- and batik had become popular and become a livelihood then. In this new region, the design had been adjusted with surrounding enviroment.

By considering its process and design, pekalongan batik was fully influenced by batik of demak. In the beginning of 20th centuries, the popular batik process was handwritten batik. Its unbleached plain cloth was made of both domestic and import product. After World War I, stamp batik and the use of foreign drugs –made of Germany and England- had just been known.

In the beginning of 20th centuries, the weaving, that produced a cummerbund whose thread twined in a simple way, were found in Pekajangan for the first time. A few years later, batik has just been known. It was processed by the employees working in weaving sector. Batik kept on developing faster than cummerbund weaving. Furthermore, most of employees of sugar factory in Wonopringgo and Tirto had ever moved on batik companies because of its higher salary. 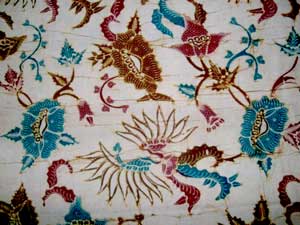 In the end of 19th centuries, batik was known in Tegal. The material used was domestic product taken from various trees: bengkudu, nila, soga tree. For its weaving, it was self product. For the first time, the color of Tegal batik was sogan and gray babaran. Then, it was added in nila (indigo) and red-blue. In this period, Tegal batik was distributed outside such as west Java. The trader bought it on foot. Historically, it was them that present batik in Tasik and Ciamis. Besides, other new comers from central Java had participated in developing batik in this area.

In the beginning of 20th centuries, after the World War I, import unbleached plain cloth and import drug had just been known. Most of Tegal batik entrepreneurs was running out of capital. They took the basic commodity from Pekalongan on credit. And they sold it to Chinese who gave them a credit. When the economy crises occurred, the sold of Tegal batik was slowing down. It recovered from 1934 to the beginning of World War II. When Japan occupied in Indonesia, batik became sluggish anymore.

So did in Purworejo. It occurred on the same time with batik of Kebumen. Both of them came from Yogyakarta for about 21th centuries. Batik development in Purwerojo was faster than that in Kebumen. While for its production, it had the same product as Yogyakarta and Banyumas.

In Bayat, village located in the foot of Merapi Mountain, about 21 km in the east of Klaten, batik had been known for a long time ago. Surely, its history had a close relation with Surakarta palace. In Kebumen, batik had been existed for about 19th centuries. It was presented by Jogja visitors in the case of Islamic spreading. The well-known figure was Penghulu, Islamic leader, Nusjav. It was him who developed batik in Kebumen and his first settle was located in the East of Lukolo River. His heritage was a mosque. The first batik process in this town was called “Teng abang or Blambangan”.

Finally, the last process was made in Banyumas or Solo. Concerning for its pattern, it was used a turmeric whose stamp made of wooden. While the patterns were trees and kind of birds. Other material used was bengkudu tree, kemudu and nila tom.

By regarding current heritages and the last history, it might be consider that batik had been known since Tarumanegara period in Tasikmalaya. One of them was tarum tree. It was served as batik process. Remain village for making batik today were Wurug, Sukapura, Mangunraja, Maronjaya and Tasikmalaya city. For a long time ago, the most crowded place was Sukapura village and Indihiang -situated on the border of Tasikmalaya city- In 18th and 19th centuries, the war of central Java kingdom occurred. It led most of the inhabitants of Tegal, Pekalongan, Banyumas and Kudus wandering to west regions and lived in Ciamis and Tasik. Most of them were batik entrepreneurs and they ran batik trade there. Hence, it was known batik production using Soga which came from central Java. Current batik production in Tasikmalaya was batik combination from Pekalongan, Tegal, Banyumas and Kudus. It had various design and color. 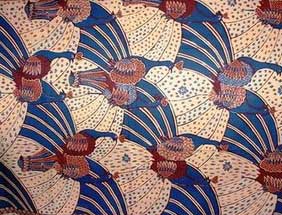 In Ciamis, batik had been known in 19th centuries, after Diponegoro War. It was because of Diponegoro’s companion role. They had presented it and made it as a livelihood. The material used for its cloth was self weaving. For painting, it made of tree such as bengkudu and tom tree. For the pattern, it was a combination of central Java batik and local product especially garutan pattern and color. Until the 20th centuries, batik production in Ciamis had developed step by step from self demands to market distribution. 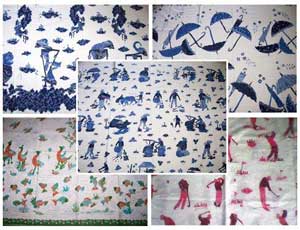 In Cirebon, the origin of batik came from Kanoman, Kasepuhan, and Keprabonan. It had the same story as Yogyakarta and Solo Batik. However, its specific feature was flora and fauna picture. There was also beach pattern, influenced by China mind and Garuda bird, influenced by Yogya and Solo batik.

Like other regions, in Jakarta, batik had been known in 19th centuries, presented by central Java visitors. The outstanding batik area in Jakarta were Karet, Ilir and Udik dam, Kebayoran lama, Mampang prapatan as well as Tebet. Before World War I, Jakarta, especially fish market Harbor, had become interregional shopping center in Indonesia. After World War I, when stamp batik had just been known, batik production increased and batik traders looked for a new area whereas the leading textile and batik area in Jakarta were Tanah Abang (the most famous than others), Jatinegara and Jakarta city. Local batik production from Solo, Yogya, Banyumas, Ponorogo, Tulungagung, Pekalongan, Tasikmalaya, Ciamis and Cirebon gathered in Tanah abang and it was sent to other region out of Java. Compared to Chinese and Arabian batik traders, Indonesia was less than others. Based on this fact, they had an initiative to establish Batik Company in Tanah abang, Jakarta.

After Word War I, batik entrepreneur was Chinese whose employee came from Pekalongan, Yogya, Solo as well as local labor. Next, after considering its process, the origin inhabitant set up batik Company whose pattern and process were adjusted by Pekalongan, Yogya, Solo, and Banyumas batik. The batik commodity used was self weaving product as well as its drugs, made of bengkudu, wooden, turmeric etc. The basic cambric became popular and its market distribution was in Tanah Abang market and surrounding. Furthermore, batik spread out in many part of the cities: Padang, west Sumatera, and other regions out of Java.

By the end of World War I, West Sumatera was one of the customers of batik from Pekalongan, Solo and Yogya. However, Hand weaving- Silungkang and plekat weaving- existed first than others.

After Japan occupation, there was lack of batik stock in Padang whereas the demands keep on increasing from day to day. The customer ordered it to their daily activities. It caused by a serious conflict between Sumatera and Java as well as Dutch blockades. Related to this matter, batik traders therefore tried to produce their own batik. By having self product and implementing sophisticated research of batik from out of Java, they took the pattern and applied in wooden as stamp tool. Batik drug used was self product made of various plants: bengkudu, turmeric, gambier, resin etc. White background had taken from the former/second hand one and hand weaving product.

In 1946, the first company appeared was in Sampan region, Padang pariaman: Bagindo Idris, Sidi, Ali, Sidi Zokaria, Sutan Salim, Sutan Syamsudin and Payakumbuh. In 1948, it was appeared Sir Waslim (from Pekalongan) and Sutan Rajab. In 1949 most of them set up Batik Company using the material made in Singapore through Padang and Pekanbaru harbor. After having open cooperation with Java, they couldn’t even run their business. Most of Padang batik had a black, yellow, red and purple color. They used Banyumasan, Indramayu, Solo and Yogya pattern. Nowadays, the pattern is better than before. However, it is much worse than that of Java. The stamp tool used is made of metal and most of its productions are sarong.