When you come back to see how the existence of the batik of bali, then in fact there have been changes and begins since the era of the 1970s. However with the industry, batik is still makin squirm in. 1997.

However, in fact, batik fabric himself has also enliven the excitement related noise. This is mainly a matter of bali as a location described as paradise of the world due to the exotic nature having as well as tempting people to visit the place.

Moreover, with the appearance of batik design, it had its own uniqueness among all facets of batik fabric in Indonesia. bali batik fabric was not simply incarnate as a headband, but has been so collectibles which can be obtained by anyone.

Meanwhile there is also mention that the existence of bali batik fabric craft industry began since th. 1970s. the art of batik is spearheaded by pande ketut krisna tegeha, banjar village from sukawati, gianyar, bali.

at that time, the introduction of fixed batik is done by very manual. batik weaving techniques and retain the cap/tjap using a technique with loom manuals (ikat weaving). at this time we are more familiar with the term “Alat Tenun Bukan Mesin (ATBM)”.

This batik fabric change itself has been more and more popular as well as a natural fusion of very fast. This subject has been due to the growing number of batik fabric industry as well as provide a range of typical Balinese batik style motifs. do not miss also sorts of shades blend of Balinese batik such as bali-papua batik, bali-pekalongan batik, etc.

causes of Fusion on the other hand is not and does not just because, as we know that the island of the gods was very much touched various entrants who then gave the turn itself also in the subject system of the batik. This subject deals with all existence of the island.

Moreover, Balinese batik is favoured by international market share because of the bright colors and hand dye-colouring, especially in the USA, Canada, UK and australia there are quilting batik fabric of bali which has its own market segmentation, because different quilting batik fabric with other textile from rotary mechine

Although there are thousands of different batik designs, particular designs have traditionally been associated with traditional festivals and specific religious ceremonies. Previously, it was thought that certain cloth had mystical powers to ward off ill fortune, while other pieces could bring good luck.

In general, there are two categories of batik design: geometric motifs (which tend to be the earlier designs) and free form designs, which are based on stylized patterns of natural forms or imitations of a woven texture. Nitik is the most famous design illustrating this effect.

Certain areas are known for a predominance of certain designs. Central Javanese designs are influenced by traditional patterns and colors. Batik from the north coast of Java, near Pekalongan and Cirebon, have been greatly influenced by Chinese culture and effect brighter colors and more intricate flower and cloud designs.

High fashion designs drawn on silk are very popular with wealthy Indonesians. These exceptionally high-quality pieces can take months to create and costs hundreds of dollars. 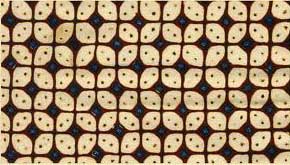 Kawung is another very old design consisting of intersecting circles, known in Java since at least the thirteenth century. This design has appeared carved into the walls of many temples throughout Java such as Prambanan near Jogjakarta and Kediri in East Java. For many years, this pattern was reserved for the royal court of the Sultan of Jogjakarta. The circles are sometimes embellished inside with two or more small crosses or other ornaments such as intersecting lines or dots. It has been suggested that the ovals might represent flora such as the fruit of the kapok (silk cotton) tree or the aren (sugar palm). 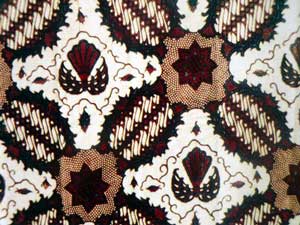 Ceplok is a general name for a whole series of geometric designs based on squares, rhombs, circles, stars, etc. Although fundamentally geometric, ceplok can also represent abstractions and stylization of flowers, buds, seeds and even animals. Variations in color intensity can create illusions of depth and the overall effect is not unlike medallion patterns seen on Turkish tribal rugs. The Indonesian population is largely Muslim, a religion that forbids the portrayal of animal and human forms in a realistic manner. To get around this prohibition, the batik worker does not attempt to express this matter in a realistic form. A single element of the form is chosen and then that element is repeated again and again in the pattern.

Parang was once used exclusively by the royal courts of Central Java. It has several suggested meanings such as ‘rugged rock’, ‘knife pattern’ or ‘broken blade’. The Parang design consists of slanting rows of thick knife-like segments running in parallel diagonal bands. Parang usually alternated with narrower bands in a darker contrasting color. These darker bands contain another design element, a line of lozenge-shaped motifs call mlinjon. There are many variations of this basic striped pattern with its elegant sweeping lines, with over forty parang designs recorded. The most famous is the ‘Parang Rusak’ which in its most classical form consisting of rows of softly folded parang. This motif also appears in media other than batik, including woodcarving and as ornamentation on gamelan musical instruments. 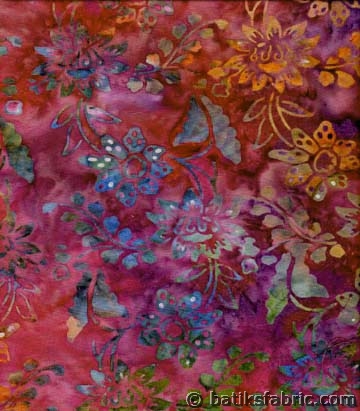 Modern batik, although having strong ties to traditional batik, utilizes linear treatment of leaves, flowers and birds. These batiks tend to be more dependent on the dictates of the designer rather than the stiff guidelines that have guided traditional craftsmen. This is also apparent in the use of color that modern designers use. Artisans are no Modern Batiklonger dependent on traditional (natural) dyes, as chemical dyes can produce any color that they wish to achieve. Modern batik still utilizes canting and cap to create intricate designs.

Fashion designers such as Iwan Tirta have aggressively introduced batik into the world fashion scene. They have done much to promote the Indonesian art of batik dress, in its traditional and modern forms.

The horizon of batik is continuing to widen. While the design process has remained basically the same over the last century, the process shows great progress in recent decades. Traditionally, batik was sold in 2 1/4 meter lengths used for kain panjang or sarong in traditional dress. Now, not only is batik used as a material to clothe the human body, its uses also include furnishing fabrics, heavy canvas wall hangings, tablecloths and household accessories. Batik techniques are used by famous artists to create batik paintings which grace many homes and offices.

Fine quality handmade batik is very expensive and the production of such works is very limited. However, in a world that is dominated by machines there is an increasing interest in materials that have been handmade. Batik is one of these materials.

During your stay in Indonesia, take advantage of your time here to learn more about the fascinating world of batik. Have a batik dress or men’s business shirt made for you by a seamstress or tailor. Visit batik factories in Jogjakarta, Surakarta, Cirebon or our factory in Pekalongan to see for yourself how the intricate process is conducted or ask questions of batik artisans giving demonstrations in stores such as Sarinah, tanah abang or thamrin city in Jakarta. You will come away with sense of wonder over the time, effort and patience put into the creation of each batik cloth. You too may soon grow to love the distinctive waxy smell of batik and your batik acquisitions will provide many memories of your stay in Indonesia. Your support of the batik industry will also ensure that this art form grows to even greater peaks.